The 1st Black Dog Shootout was organized in 2011 when a
group of guys came together and used their love and respect of the outdoors to
help a friend through the financial difficulties brought on by her fight
against Leukemia. A sporting clay shoot followed by dinner, music and an auction
was quickly organized. The daylong event at the Chula Vista Ranch allowed the
group to raise more than $25,000 to benefit Ashley Dike Baganz.

A year later, Ashley was doing great and she and her husband Jason were the proud parents of baby twin boys. That year Ashley was able to become involved on the fund raising side. The Black Dog Charity, LLC was formed and application for non-profit (501(c)3) status was applied for.  Our now annual event once again was successful and we donated the net proceeds to the Leukemia and Lymphoma Society through its Light the Night Campaign.

In 2013 Black Dog Charity decided to expand on the success of the first two events, change things up and extend the fundraiser to a include a Friday night auction party preceding the Saturday sporting clay shootout. The event was a huge success and we more than doubled the amount raised the previous year. That year’s proceeds were donated to Light the Night AND Cook Children’s.

2014 was another record breaking year as we had nearly 600 attend our Friday Night Auction Party and the Saturday Shootout was sold out with over 200 shooters. We again broke our record for the amount raised and were able to help Jason and Ashley with a substantial gift while also donating $30,000 to LLS and the Light the Night Campaign. We became a Gold Sponsor of LLS and Light the Night Walk and Ashley was their Honored Hero of the Year. Read more about Ashley here .

The 2015 Black Dog Shootout was the most incredible yet. We were overwhelmed by the dedication and generosity shown by our supporters and volunteers. Pouring rain, right up until the time the Auction Party was due to start, did not dampen the spirit of our donors. As everybody sloshed through the mud, we once again broke our fundraising record with nearly $100,000 in net proceeds. Tragically, just after our 2015 event  Ashley lost her battle with Leukemia and passed away on March 26, 2015. This year we committed over $50,000 to the Baganz Family to help provide for Jason and Ashley’s three year old twins. Additionaly, we have committed $10,000 to a college fund for the boys. We will also be making contribution to LLS in the amount of $20,000. After a small reserve for future expenses any remaining funds will go to local organizations chosen by our board of directors. Those small donations will be focused on supporting organizations that work with children and their families in the local community.

The 2016 Black Dog charity event marked our 1st without Ashley which we began our planning with a heavy heart.  We were over whelmed with the response and continual support for the first time ever, raising in excess of $200,000. We have come a long way since year one with a small shoot on Saturday afternoon that raised about $30,000. In addition to making sizable donations to LLS we are pleased to fund a patient navigator position in Fort Worth. This is a new position for the Fort Worth community and is patterned after a similar one in Dallas. To begin, the Patient Navigator (also known as Patient Advocate) will work one day per week at Baylor All Saints, two days per week at The Center for Cancer and Blood Disorders and one day per week in the Fort Worth LLS office. The role entails supporting patients in a number of different ways. In addition to our work with LLS, we have pre-paid a year’s tuition for Ashley’s twin boys to attend pre-school at Southwest Christian School. We will also be adding to the boy’s college fund.

2017 – We began 2017 with heavy hearts as we lost one of our own. Josh Harbuck, good friend and founding board member of Black Dog, died in a tragic auto accident shortly before last year’s event. We committed our portion of our proceeds to honor his memory and the Black Dog community stepped up in a big way. We were able to donate $70000 to the Josh Harbuck Family Trust benefitting Josh’s young family. We did this while still maintaining our same level of commitment to the work we do with LLS. Once again, we funded the patient navigator to work with local hospital patients, provided travel vouchers and supplied patient kits for newly diagnosed Leukemia and Lymphoma patients. In 2017, for the 7th year in a row we surpassed the previous year’s efforts by raising more than $230,000. 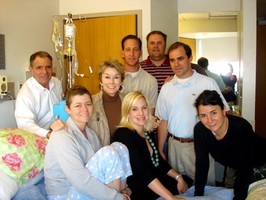